Some of the best places to see in Kefalonia Island 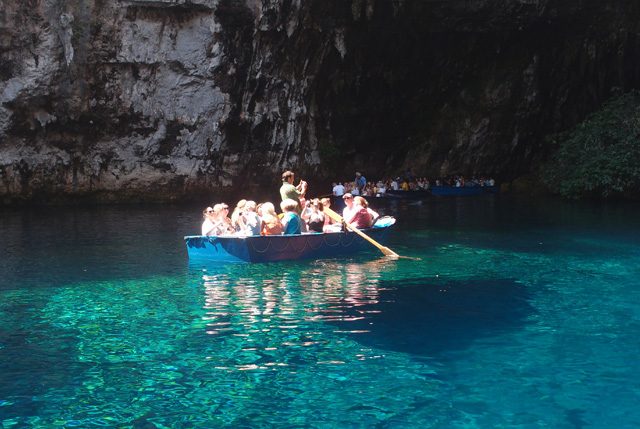 The subterranean lake of Melissani was discovered in 1951 by the speleologist Gianni Petrochilo.

The internal part has collapsed along with a major part of the roof revealing a marvellous view.

Crystal clear waters and unique geophysical sculptures, seen from a boat that guides you through the entire lake.
An unforgettable experience. 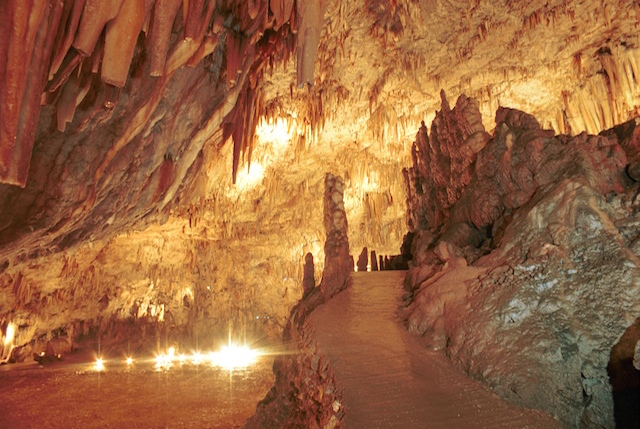 Drogarati's Cave, which is close to Sami, was discovered 300 years ago, when a part of it was destroyed because of a strong earthquake, and so the entrance was created.
The cave's depth is 60m. from the ground level and it is open for the public since 1963.

It's got many stalactites and stalagmites created from the rain. In the big hall of the cave (900m2), call "Sala of Apotheosis" because of its perfect acoustics, are organized music and other shows. 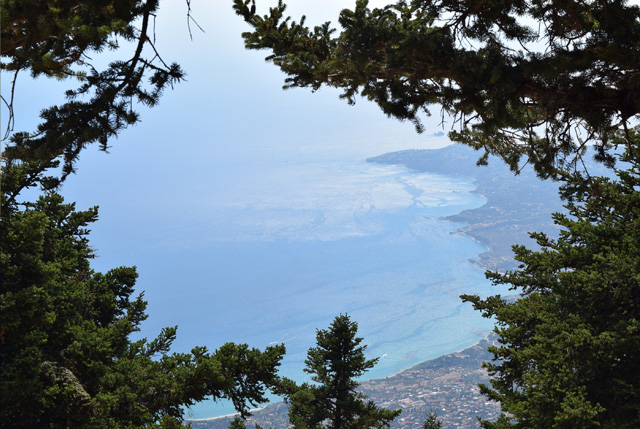 Words cannot describe the awesomeness of this majestic mountain. Mount Aenos is an exceptional natural preserve boasting a forest of the unique black firs of Kefalonia (abies cephalonica). Aenos became widely known as the Monte Negro of Greece due to the dark color of the trees that seemed black when seen from far away.
This beautiful National Park hosts a great variety of flora species and a rich fauna including reptiles and birds, such as the hawk, the woodpecker and the blackbird. The most important mammal found here, but unfortunately is under extinction, is the famous Aenos wild horse, which belong to the Pindos breed and is small and very strong. Become a part of nature's magic. 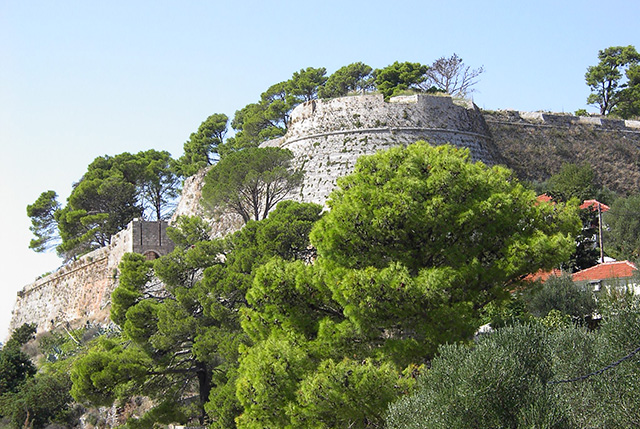 The Fortress of Agios Georgios is located at the village Peratata on a 300 m altitude and was probably constructed during the 12th century AD by Byzantine Emperors. It’s about 16.000 m2 and its surrounding walls are approximately 600 m long. Inside the walls there were public and private buildings, churches, food and ammunition warehouses, barracks, hospitals, prisons and water tanks.
Visitors will also see the remnants of the catholic church of Agios Nikolaos and a tunnel that led from the castle to the lagoon of Koutavos and it was used in case of emergency exit. This castle was actually the capital of the island till 1757, when Argostoli became the new capital, but it was heavily damaged during the earthquakes of 1636, 1637 and 1953. 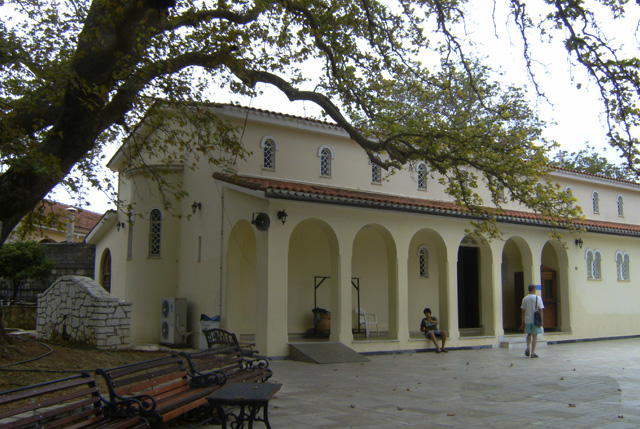 The beautiful Monastery of St. Gerasimos is a must-see.

Close by, the old church, which is built above the tomb and cave where the Saint lived, holds the Saint's relics.

In 16th of August, in which a great miracle occurred, a huge bazaar takes place. 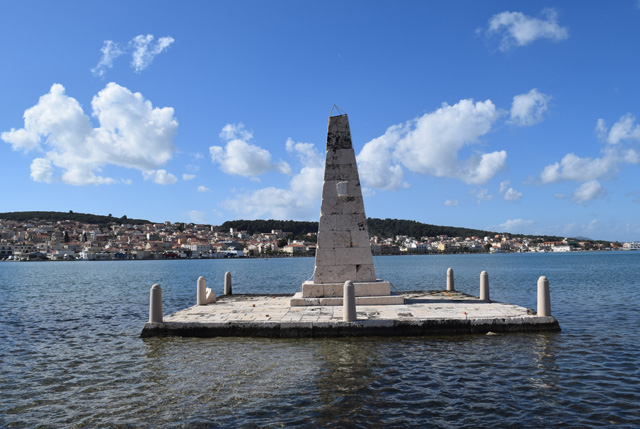 Argostoli is situated at the southern part of the island and its the capital of Cephalonia since 1797. It is built amphitheatrically at the heart of the deep golf of Koutavos and it has a well organised port. It is the biggest town of the island with rich trade activity, a town that looks to the sea.

The architecture is influenced by all the Ionian elements where overmaster the red roofs and wide terraces. Its town planning is modern with large streets and many roads for pedestrians. You can visit the Archeological Museum, the Folk Museum, enjoy walking or shopping at the pedestrian road of Lithostroto or by the waterfront. Plenty café and restaurants can be found around the central square of the town, operating from morning till late hours. 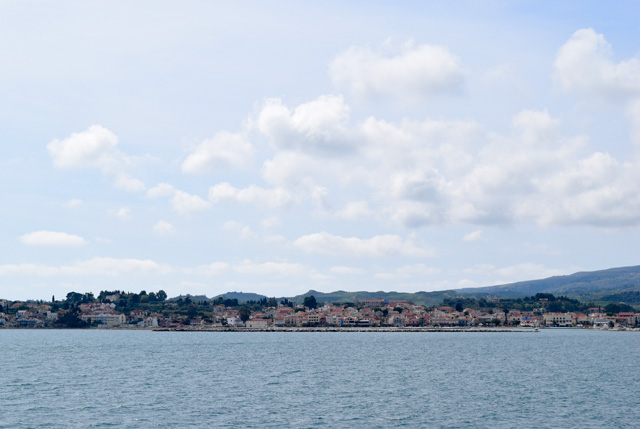 Lixouri is the second biggest town of the island. It is situated at the south-western part of the island, in front of Argostoli and the two of them are connected with a ferry boat.
Lixouri was called "piccolo Parigi"- small Paris - because of a small river that divides the town in two parts, like Sicuana divides Paris. This nick name though comes true because of the intense cultural activity of the town.

Protector Saint of the town is the famous local author and poet, Andreas Leskaratos, whose statue overmasters the coastal avenue with its back turned to Argostoli. 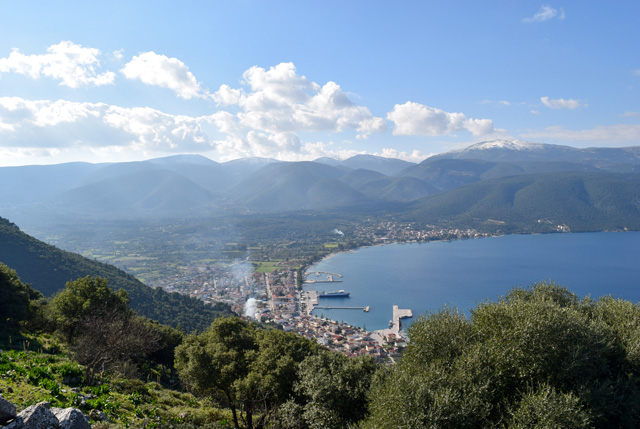 Sami is the ideal place to settle and organize your excursions. Either you have a car or not, you will find so many things that are worth to pay a visit.

You will find a variety of shops, atm machines, super markets and taverns serving local wine and excellent fresh fish. Everything you need is just a few minutes away. Sami also has a Health Center operating 24hrs in any case of emergency. 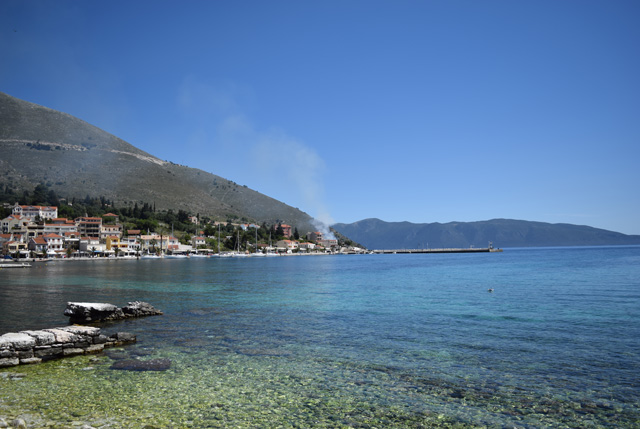 Agia Efimia is one of the most traditional and picturesque villages in Kefalonia. It is considered an ideal place to start your trips around the island, but also one of the most attractive ports opposite Ithaca.

In the summertime many sailing boats gather here to find supplies and a good rest from the more frequented places of the Ionian. Agia Efimia consists of a collection of tranquil bays with beautiful pebble beaches. Tourism is well organized in Agia Efimia, and the visitors may get all the services needed for a fine holiday. 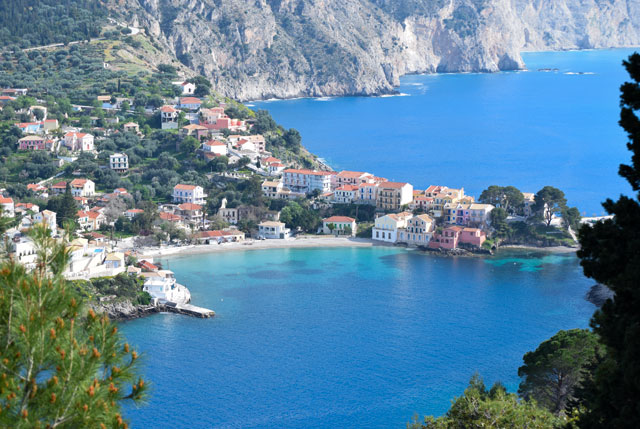 Assos is a small and picturesque fishing village 36 kilometers away from Argostoli.
It is known for its imposing 16th century Venetian fortress. The fortress was built in 1585, when Assos became the capital of the northern part of the island, and it is a typical masterpiece of the Renaissance architecture

Today, one can still see the ruins of the walls, the house of the Venetian chief-master, military buildings and St Marco's church. 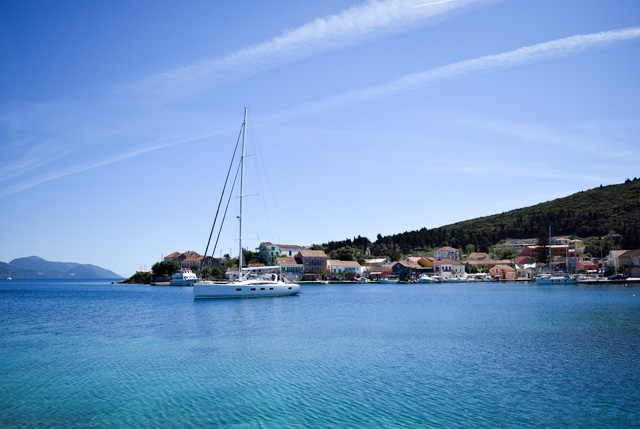 Welcome to Fiscardo, the picturesque and beautiful Greek harbour village on the Northern tip of Kefalonia. Of the approximate 365 villages on this large and diverse island, Fiscardo is unique in that it was left virtually unscathed during the great earthquake of 1953, that ruined most of the islands historic buildings.
Traditional fishing boats moor alongside the more extravagant temporary visitors during the summer. Fiscardo at night takes on an entirely different perspective. The lights, the old buildings, cafe, bars and restaurants all combine to provide a magical Mediterranean atmosphere.. 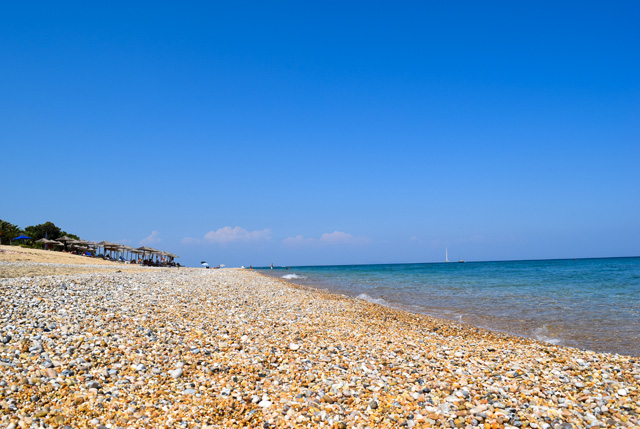 Skala is located at the south - east corner of the island.

Beside of the beautiful scenery and the long sandy fully organized beach, here you can also find everything you need from a variety of banks, public services, supermarkets,caffe's, bar restaurants, pharmacies and many more. 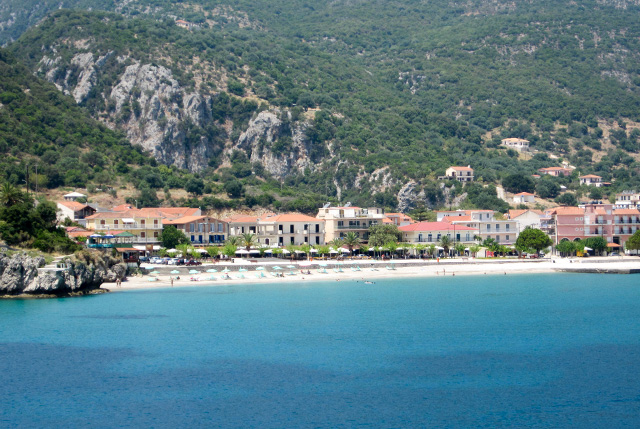 Poros is the biggest district of new Elios – Pronnoi municipality. Is a beautiful, picturesque village, surrounded by the villages Tzanata, Asprogerakas, Kabitsata and Riza. It has a population of 1500 inhabitants.

Its port is a significant link between Kefalonia and continental Greece. It was rebuilt after the earthquake of 1953, after the few fishermen’s houses were destroyed , it is harmonically constructed at the foot of the mountains Pahi and Atros.
A vast indented coastline, that is 2km long, abundant in sandy beaches and leeward ports, comprises its seafront. It also has ,many small beaches reached by 4X4 vehicles.

There are some very unique and beautiful beaches in Kefalonia, where visitors can swim and sunbathe for hours. Kefalonia's north coastline has small, clean, pebble beaches, while the southern shores are long and sandy. 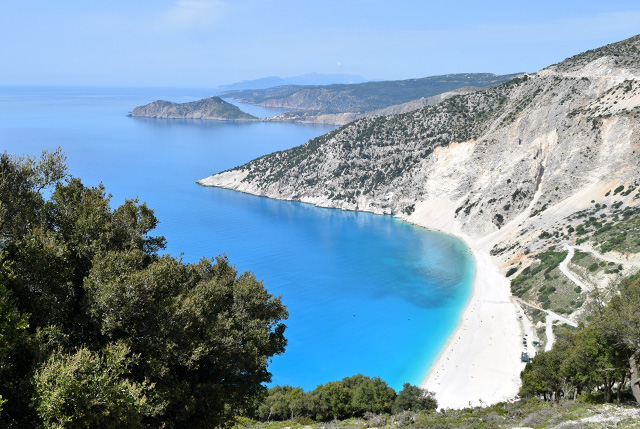 Myrtos beach has been voted the most beautiful beach in Greece for several consecutive years. It's a blue flag beach, and was the location for several scenes of the movie Captain Corelli's mandolin.
From the road above you have the most stunning view of the beach, known for the contrast of the white pebble and the shades of blue that the currents create in the sea with the dark green of the area..
Here, you can swim and snorkel in the crystal-clear seas or simply stretch out on the sands and wonder at the amazing, dream-like views all around you. There's also a useful small bar-taverna on the sands for refreshments when you need them. 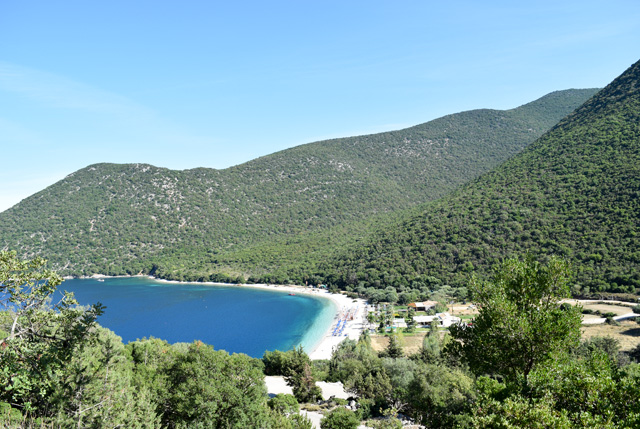 Antisamos is a beach located near the town of Sami. It's a blue flag beach where many scenes of the film "Captain Corelli's mandolin" where shot.
The ever emerald blue waters, the small white pebbles, the amazing view, the trees that reach all the way to the water are only few of its attractions. A wild scenery and a landscape that will blow your mind. Antisamos beach is full organised beach with restaurants, water sports and sun beds.
You can also get there from various walking trails throughout the local mountains, all of them offering an endless shade that seem to come out from a fairy tale. 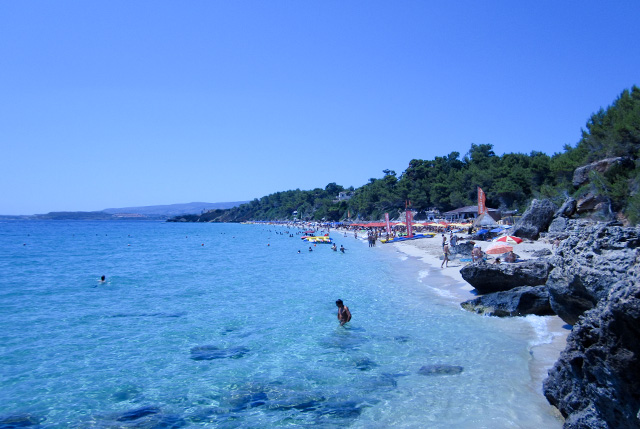 Makris Gialos is another beautiful blue flag beach, situated just outside Argostoli, in the Lassi area.

Near by the golden sandy beaches Makris Yialos and Platis Yialos giving excellent choice for a daily tour, combine sea activities and local tastes, if you are not stay in the area. 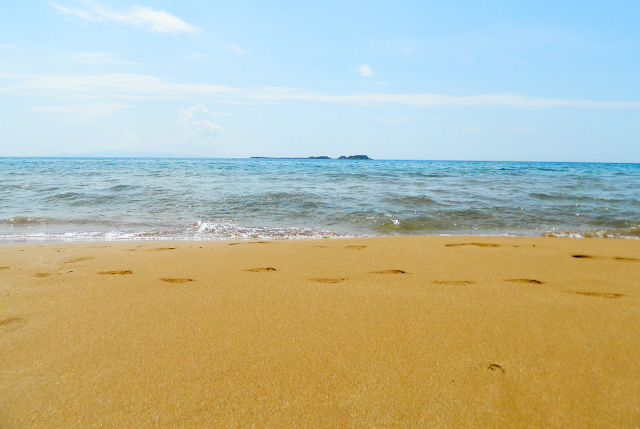 The beach of Xi is situated a few kilometres south of the town of Lixouri. Access is very easy and the car parking is very spacious.

It is a very long beach and it is famous for the colour of its sand which is red! The water is very shallow at a distance of many meters and the seabed is covered with thin sand.

In Xi there is a canteen, a cafe and you may rent umbrellas and deck chairs. Moreover, Xi is ideal for water sports such as jet ski, sea ski, parachute, etc.

Skala is located at the south - east corner of the island. The village of Skala among other things is famous for its fantastic beach.

Skala beach is 3 klms long, with different places to explore, with areas with fine sand and others with small rocks with absolutely beautiful colours.

You can also find scuba diving, watersports and other things to keep you occupied.

The beach of Assos can be described as a "family" beach, as it is located at the centre of the village, facing the peninsula of the Castle, thus giving the impression of a protected lake. It is covered with pebbles and the seabed is very shallow and covered with white sand.

Exactly behind the beach, at a few meters distance, there is a row of picturesque buildings, which are cafes and shops. The beach is quite crowded and it is very suitable for children, given that it is very safe. 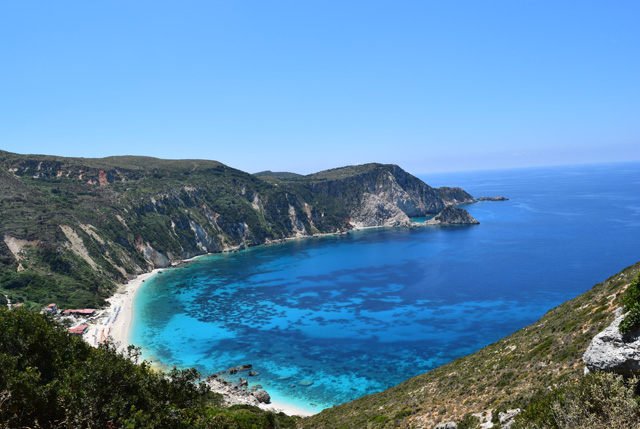 From here you may enjoy the most beautiful sunset on the island.

Some other beautiful beaches are the Dafnoudi, Foki and Emblisi in Fiscardo, Lourdas and Trapezaki beach on Kefalonia's south coast and also many charming little pebble and sandy bays across Agia Efimia and Sami΄s coastline.